Canterbury Baptist Church was formed in 1823 and was known by the place in which it was situated, ‘The Round House’ in King Street. In 1864 it relocated to the present-day premises in St Georges Place, with the halls being added in 1915.

A chapel at Tyler Hill was opened in 1885 and the Gammon family were the prime movers in securing this place of worship. CBC initiated the building of a church at Aylesham, which was opened in 1928 and the two churches still have strong links, most recently with Rev Laura Moncaster a previous Minister in Training at CBC now becoming the Minister of Aylesham Baptist Free Church. 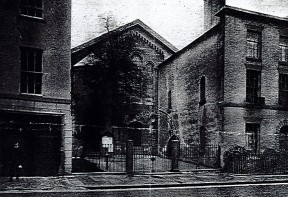 Hospitality has always been offered at CBC (something we’re still proud of today!) and this was especially so in the World Wars when care was given to members of the forces. In the late 1940s, Phyllis Hooker was the first woman to be elected to the office of deacon, now women and men serve equally in many spheres.

The history of the church includes sending missionaries to China and Africa, particularly the Congo. Canterbury Baptist Church has a number of overseas mission partners and many of our members have been involved in short term missionary service in a variety of ways.

The church has known times of large congregations, but in the early 1990s the fellowship faced a declining membership, particularly as young people moved away to study and work. Today however Canterbury Baptist Church has a growing, vibrant congregation, as students and young adults, having been cared for during their time in Canterbury and become involved in the worship, have stayed to obtain jobs in Canterbury and take on responsibilities in the life of the church. 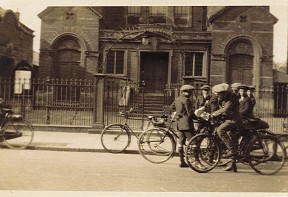 At the turn of the millennium the church, under the new leadership of Rev Dave Stedman, felt it important to commit to improving the buildings at St Georges Place. This project over the decade took on many different shapes and forms until in 2011 the decision was made to completely refurbish St Georges Place and turn the church hall into a Community Hub. To facilitate the work Tyler Hill Chapel, which had seen its attendance decline to a mere few, was sold, as was a second property in Long Meadow Way. The sale of these properties allowed for a £1million refurbishment of the premises to take place. 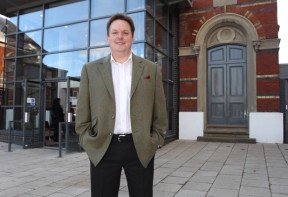 There is now disabled access to the premises which there had not been before. The church now has very comfortable seating, and state of the art audio/visual technology. The worship level and basement level of the main church have now become multi-purpose spaces, and CBC have been very keen to make these available to be let by other churches and local charities. By becoming a more modern and practical facility, CBC has had greater opportunity to reach out to the community like never before, and we stand at the beginning of a new phase in God’s mission for Canterbury Baptist Church.

Following Rev Dave Stedman’s move to serve as CEO of African Pastors Fellowship in 2014, Rev Andrew Fitzgerald was called back to CBC to serve as Minister in October 2015, having been our Student Worker and Training Minister in previous years. His call was specifically concerned with the development of our Community Hub vision, which led to a large scale community conversation in partnership with ROC (Redeeming our Communities) and multiple opportunities since to serve with others in addressing various needs in Canterbury.

Since then, we have developed a Parish Nursing ministry, community cafe (in partnership with Lily’s Social Kitchen) and Renew 11 (in partnership with Renew Wellbeing) onsite. The more recent coronavirus pandemic has also presented the opportunity to offer food parcels and work more closely with local churches to serve those suffering debt and poverty.

With the introduction of our Hub Manager, Stephen Flower, the church premises have been become a ‘go to’ place for churches, community groups and agencies to meet. As well as for the church to gather for Sunday worship, lunch clubs and the Alpha Course.

Moving forward, we hope the church will continue to serve as a fabulous resource to the community. As we also encourage our scattered congregation to serve God in the various Frontlines where He has placed us, in Canterbury and beyond.

Canterbury Baptist Church
Join us for a Morning Service with Communion this Sunday on 15th May @ 10:30am at Canterbury Baptist church. As usual, the service will be also streamed live on YouTube. Rachel Taylor will be leading the service and Nathaniel Moody will be preaching as we continue to learn about God through David & Lament in the Psalms.

Canterbury Baptist Church
Join us for Sunday morning service on 8th May at 10.30am with worship, prayers and Bible teaching followed by a bring and share church lunch. This Sunday Rachel Taylor will be leading the service and Rev Stephen Cave will be preaching as we continue our new sermon series on the Theme of David - Lament in the Psalms. For those unable to attend, the service will be available on live stream. Looking forward to seeing you on Sunday!

Canterbury Baptist Church
Join us for our Sunday morning service on 1st May at 10.30am with worship, prayers and Bible teaching. This Sunday Rachel Taylor will be leading the service and Rev Colin Armstrong-Davey will be preaching as we start the new series "David - Lament in the Psalms". For those unable to attend, the service is also available live on our YouTube
Channel https://www.youtube.com/channel/UCFQSLiRX26Sja26X3Rl9JiA

Canterbury Baptist Church
When this happens, it's usually because the owner only shared it with a small group of people, changed who can see it or it's been deleted.
View on Facebook

Canterbury Baptist Church
Join us for our Sunday morning service on 24th April at 10.30am with worship, prayers and Bible teaching. This Sunday Rachel Taylor will be leading the service and Andrew Bartlett will be preaching on the theme of Emmaus road. For those unable to attend, the service is also available live on our YouTube
Channel https://www.youtube.com/channel/UCFQSLiRX26Sja26X3Rl9JiA