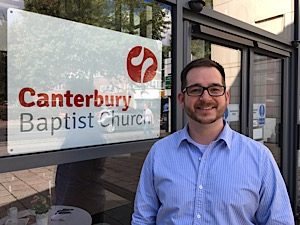 Andrew has been the Minister here since November 2015. First studying at Canterbury Christ Church University (Music and Religious Studies) before working for the church and training for Baptist Ministry at Spurgeon’s College, London. He served as Minister at Central Baptist Church, Leicester before returning to Canterbury with his wife (Jenny) and three daughters (Hope, Ruby-Grace and Anna). He spent most of his childhood in East Anglia, supports Arsenal, Leicester Tigers and Ulster (mainly with pressure from his in-laws!) Enjoys working with Christians and churches across the city, serving the wider baptist body to glorify God and see His kingdom here.

Rachel started as Minister in Training at CBC (one day a week at Aylesham Baptist Free Church) in September 2020 moving from a career in the NHS as an Occupational Therapist. She lives in Dunkirk with her husband George, who is an art teacher, and son Noah. Rachel has always had a passion for sport and an active lifestyle, with a background in women’s football. These days she fits in a swim, gym or cycle when possible and supports Norwich City. She also enjoys reading varied Christian literature and listening to podcasts. Rachel has a heart for evangelism, desiring others to know the transforming power of God through Jesus Christ. That many would hear the Word and believe in His Name, of which both she and George are a testimony. She has an anticipation to see God’s Kingdom come, on earth as it is in heaven, in Canterbury and Aylesham. 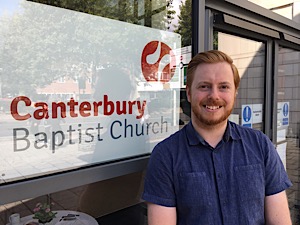 Stephen joined the Staff Team in July 2017. He had previously been a primary school teacher and a training local preacher in the Methodist Church before making the jump to working and worshiping here at CBC. He has a wife called Doreen, who is a pharmacist and lives with Stephen in sunny Ramsgate, along with their son, Ezra. Stephen actually comes from Ramsgate and went to university at Canterbury Christ Church. He loves cooking (and eating his wife’s delicious food!) and is a big sports fan, supporting Manchester United, the Indianapolis Colts and Kent Spitfires as well as playing badminton and other sports as often as he can. Stephen is very excited about working here in Canterbury and trying to bring churches and people together to both make the name of Jesus known and make His Kingdom work happen here for the good of those who live and work in the city. 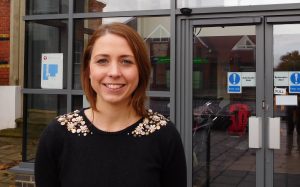 Michelle has been attending CBC since she began studying at Canterbury Christ Church University in 2004. She has previously worked as a primary school teacher in schools around Kent and also spent 7 months leading a school for orphaned children in Tanzania in 2012. Michelle currently works as a teaching assistant in a special needs school alongside her work at CBC. In her free time, Michelle can usually be found doing something creative, be that sewing, scrap-booking or Bible journaling. Since her clear call by God to work with children when she was 19, Michelle has ultimately wanted to teach children about the love of Jesus. Michelle is passionate about sharing the gospel with children and young people with the goal that they develop and grow their own relationship with Jesus and become His disciples and looks forward to doing this at CBC and in the wider community. 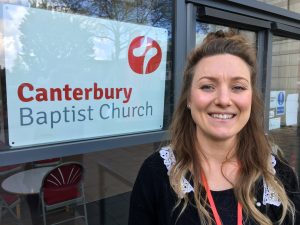 I’m married to Gill Reece, and we have four children and two grandchildren. I am trained as an electronics engineer, have run a few companies and I am now the Chief Technology Officer for a Polish biomedical startup. We came to the church about 10 years ago, and since then I have been involved in various ministries, including Alpha, Pray Ministry, Tech Team and the Leadership Team as an elder. Currently I am part of the leadership of a Housegroup. I have worked for many years in the areas of business management, HR, regulation & finance, and it is in these areas I feel that I can serve the church, as well as the spiritual aspects.

I am married to Brenda and we have four lovely boys. Praise God! Emmanuel, Jedaiah Michael-Daniel and Gabriel-Daniel. We live in Littlebourne. My family and I started worshiping at CBC in July 2016 where Brenda was baptised. I served in the body of Christ as a Sunday school teacher and church secretary in Grace Baptist Church, Kumasi and New Addington Baptist Church. I have a passion to see the young experience Jesus Christ through teaching the word of faith and prayer. I enjoy listening to songs of worship. I like natural history and I am a fan of nature and science documentaries. I support Manchester United and have a soft spot for Crystal Palace. It is a privilege to be part of the ministry of Christ Jesus at CBC and I believe God will use me to support the growth of His church.

Canterbury Baptist Church
When this happens, it's usually because the owner only shared it with a small group of people, changed who can see it or it's been deleted.
View on Facebook

Canterbury Baptist Church
We are delighted to have Rev Dr Jeremy Law with us on Sunday (6th June) who will continue our series on the resurrection appearance of Jesus in the New Testament. Andrew will lead our service with live music, prayers and video recordings. We'd love to have you join us, from 10:30am on this YouTube channel:
https://www.youtube.com/channel/UCFQSLiRX26Sja26X3Rl9JiA

Canterbury Baptist Church
So sorry that due to the weather, we have CANCELLED today’s event.
Do join us on Sunday 27th June however, when at 4pm we will be at Aylesham Baptist Church 👍🙂

Canterbury Baptist Church
We warmly invite you to join us for some live musical worship and prayer on the CBC forecourt, with singing allowed and without face coverings! Come over to CBC from 10am until 11am on Friday 4th June. If you have any song requests, please let Andrew know.

Canterbury Baptist Church
Our commitment to regular, Tuesday evening prayer continues tonight at 8pm. Join us on Zoom to pray for the world, the nation and our precious communities. Including the sabbatical of Rev Laura Moncaster. Drop us a message for call details.